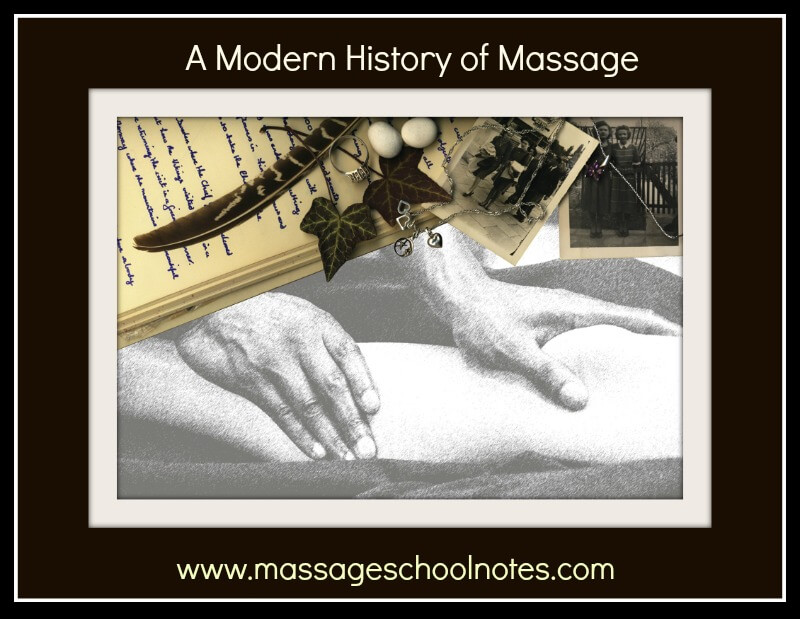 This unique History of Massage is the modern version of what it really took to get us where we are today.  The heck with Ling and all those guys.  These are the days of our lives.

This history starts in the 1960’s, more specifically in 1962 with the founding of Esalen Institute which  became the center for many transformational therapies and studies in human behavior and massage/bodywork.  In 1964,  Fritz Pearls with his Gestalt Therapy, lead the way for more experiments in present moment living and personal responsibility along with client centered relationships.

1960 -The American Massage & Therapy Association (AM&TA later to become AMTA) was incorporated as a non-profit organization in 1960.  A Code of Ethics was developed in 1960, and the Massage Journal replaced The Masseur as the official AM&TA publication in 1962.

1968 – Ruth William’s writes “25 years: History in the Making”  which is the history of the AMTA.  Read the full book here in PDF format.

1970 – Massage schools started being curriculum approved schools as compared to schools from 1930-1970 that were self credentialed schools.  1987 outside accrediting agencies were created to accredit schools.

1972 – Moshe Felednkrais writes Awareness Through Movement which follows up to his 1949  publication “The Body and Mature Behavior” and  “The Potent Self: A Study of Spontaneity and Compulsion.

1972 – George Downing  “The Massage Book” – An international classic book on the art of massage for lay people.

1978  – Hellerwork created by Joseph Heller (after training with Ida Rolf and others)  www.hellerwork.com  ,  www.josephheller.com

1981 – Lauren Berry, a physical therapist and mechanical engineer, recorded his methods of manipulating joints, “The Berry Method, Volume I”

1987 – outside accrediting agencies were created to accredit schools.

1988 – National Certification Board for Therapeutic Massage and Bodywork (NCBTMB) created by the American Massage Therapy Association (AMTA). which provided the seed money for startup.  The NCE was originally started as an AMTA entrance exam and quickly moved to becoming a national exam which we all know is not so national.

1988 –   The History of National Certification:

The idea of having a national certification board was initiated by AMTA (American Massage Therapy Association) in 1988.  AMTA gave $150,000 and later another $75,000 from their general funds to create an exam that was initially an entrance exam for AMTA potential members.  Sometime and somehow, in 1989, the intentions changed and it became a national exam.

In April of 1989, 60 massage therapists signed and sent a joint initiative to AMTA to stop the process until more information could be gathered regarding whether or not national certification was necessary for the profession.  This was rejected by AMTA.

A steering committee was chosen by  4 AMTA officers.  It consisted of 2 members of AMTA who initially proposed this action, Susan Rosen of Washington and Susanne Carlson of Oregon. Within the committee,  7 out of 9 members were AMTA members.

In May 1990, the steering committee declared that it was now separate from AMTA.

National Certification was developed in an attempt to bring credibility to the profession.  It’s intentions were to improve the status and image of the bodywork community.  The exam would certify that certain educational and professional standard were met.  The educational requirements were the bare minimum thought to be need to practice massage. The exam is based on a study done to find out what practitioners do and what they need to know.

The national certification board has created an entry level test.  It does not mean that therapist who take it will be a good therapist.  It has not eliminated prostitution or the idea the massage is often equated with prostitution. It does not mean that the therapist will know what to do when they work on your herniated disc or other injury. It does not eliminate having to be fingerprinted (in some cities) or get a massage parlor license to set up a massage business.

The test questions were supposedly made after doing a survey of what therapists do in their practices. It claims to have based the questions on what current therapists have been using in their practice. I would love to see how the survey was done and who it was sent to. How long have these people been in practice?  What information did they learn after massage school?
The test itself is questionable as it includes topics such as meridians, chakras, other types of therapies such a Ayuvedic medicine, what color your organs are on a energetic level.   I feel these do not have anything to do with doing basic massage.

What it does do, is protect the massage profession from being regulated by other professionals such as doctors, chiropractors and physical therapists. It does often give credibility to a therapist in a state that doesn’t have any regulations and states where the legislative members are uneducated about massage. There are still some cities/towns that have zoning laws restricting the practice of massage in certain areas.  There are also some places where massage is still equated with the practice of prostitution.

1989 – AMTA also created the Commission on Massage Training/Accreditation (COMTAA) in 1989 when it was created by the American Massage Therapy Association (AMTA) to set educational standards for the massage therapy profession with a goal of eventual recognition by the U.S. Department of Education (USDE). – See more at: http://comta.org/about-comta/#sthash.yPQKwWuu.dpuf

April 1996 –  ABMP was sold to a group of four people who now comprise the core of the company’s management team.

1997 – Business Mastery by Cherie Sohnen-Moe by Lippencott Williams and Wilkins.  This was one of the first books on business for massage therapists and is now it it’s 4th edition.

1999 – The Educated Heart by Nina McIntosh – one of the first ethics books.

2002 – Massage Envy Franchise started by John Leonesio (former owner of a chain of health clubs) and Shawn Haycock (Licensed Massage Therapist) in Scottsdale AZ.
Leonesio created a chain of health clubs that he sold to 24 hour fitness in 1999.  2008 – Massage Envy was sold to the Essel Group.  2010 – Massage Envy Sold to Sentinel Capital Partners (owners of groups of Taco Bell, Pizza Hut and Cottman Transmission franchises) — and now the franchise network is owned by Roark Capital Group (Roark after the character in the book the Fountain Head.)

2002 – COMTA was recognized by the USDE as an approved institutional and programmatic accrediting agency of massage therapy schools and programs – See more at: http://comta.org/about-comta/#sthash.yPQKwWuu.dpuf

2005 –  ABMP salary stats: Total earnings by massage therapists, including their earnings from other employment, were $32,506 (2005 ABMP Member Survey).

2008 – Massage Envy sold to Veria – a Texas-based, health-focused multimedia company that is a unit of Indian conglomerate The Essel Group.

2008 – Rick Rosen writes a White Paper :  On Becoming a Profession. (PDF on massagemag.com)

January 2009 –  AMTA announced it is now backing the Massage & Bodywork Licensing Exam (MBLEx) , developed by the Federation of State Massage Therapy Boards (FSMTB) was the better exam, and withdrew their support of the NCBTMB. Uhoh…  The NCB says the AMTA was saying that “AMTA’s decision to endorse the MBLEx was driven by passion rather than reason”.  see Massage Today March 2009.

June 2009 – The NCBTMB loses their way and starts offering discounts on Pizza and Oil Changes : see the breaking news.

Add Your Massage School Notes in the Comments!