You are here: Home / History of Massage / Masseuse/Masseur 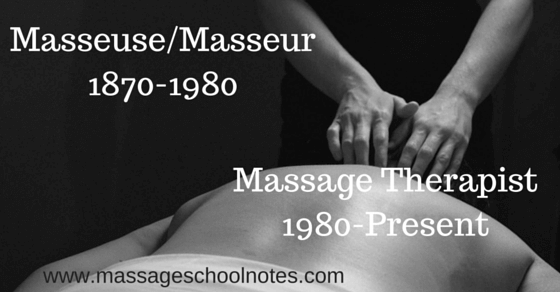 Today in the U.S., the words have become more associated with illegal ‘massage parlors’ who are actually a front for prostitution and possibly human trafficking. It isn’t really clear as to how this has become more of the norm in the U.S. as the words are still widely used across Europe.

Professionally, the words often make licensed massage therapists cringe.  Massage Therapists now go through basic training in massage skills, pathology and basic anatomy/physiology.  They are also required to pass licensing exams in almost all US States.  (There are still a few states that do not require state licensing.) Some states will still even use the words in their licensing laws.  (That really needs to be changed!)

As I was searching for information on the history and origins of the words masseuse or masseur, I came across this handy chart showing the number of uses of the word in various literature.

So the words Masseuse or Masseur hopefully are on their way to retirement.  People who perform massage professionally and are licensed to do are directed by the legislation in their state as to what they are able to call themselves.  Masseuse and masseur are actually still used in some states although we are moving away from those terms.

Whatever people who do massage are called, doesn’t really matter as long as it is Great!
There is also a big difference between those who are professional massage therapists and places that say they are doing massage when in fact they are doing ‘happy endings’ and some of the ‘asian massage places’ which is really just another word for prostitution.  It helps to know the difference.